The Red Sea is the long and relatively narrow body of water that lies between the northeast coast of Africa and the Arabian peninsula that is bordered by Egypt, Israel, Jordan, and Saudi Arabia, Yemen, Djbouti, Eritrea, and Sudan. Despite some of those countries being red flags for war and conflict, the Red Sea is a remarkably peaceful and conflict-free body of water. Here, … END_OF_DOCUMENT_TOKEN_TO_BE_REPLACED 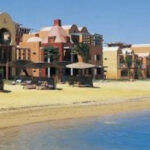 There aren’t many hotel options in the quaint Red Sea-side town of El Gouna, but that’s definitely a net plus for this destination. The more popular place to go around here is about 20 kilometers south to Hurghada, where the cheap holiday package tourists from Europe and elsewhere crowd into the myriad mediocre resorts there. But just up the coast is the quieter, lesser known, … END_OF_DOCUMENT_TOKEN_TO_BE_REPLACED