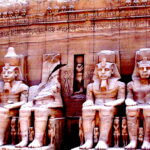 Ramses II was one of ancient Egypt’s greatest Pharaohs. Not only did he manage to live into his 90s in an era devoid of modern medicine and build an empire over which he ruled for 66 years, but he is thought by some to be the Pharaoh featured in the Bible during the Exodus. (This isn’t likely, but it didn’t stop him from being immortalized in this role by Hollywood in The Ten … END_OF_DOCUMENT_TOKEN_TO_BE_REPLACED