On this year’s International Women’s Day today, Egypt Travel Blog would like to pay homage to one of ancient Egypt’s most famous figures and a woman whose life and legacy are worthy of remembrance. Cleopatra is one of the most famous women in all of human history. She was a beloved queen of an ancient people who skillfully forged powerful alliances through love, lust, and … END_OF_DOCUMENT_TOKEN_TO_BE_REPLACED 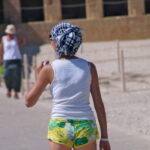 Even the most liberal of Arab countries is pretty socially conservative by the standards of every other region of the world. Whether it be the "West," east Asia, the former Soviet republics, eastern Europe, or Latin America, nearly every other part of the planet would consider shorts, especially in hot weather, to be perfectly appropriate attire in public spaces. In the Arab … END_OF_DOCUMENT_TOKEN_TO_BE_REPLACED